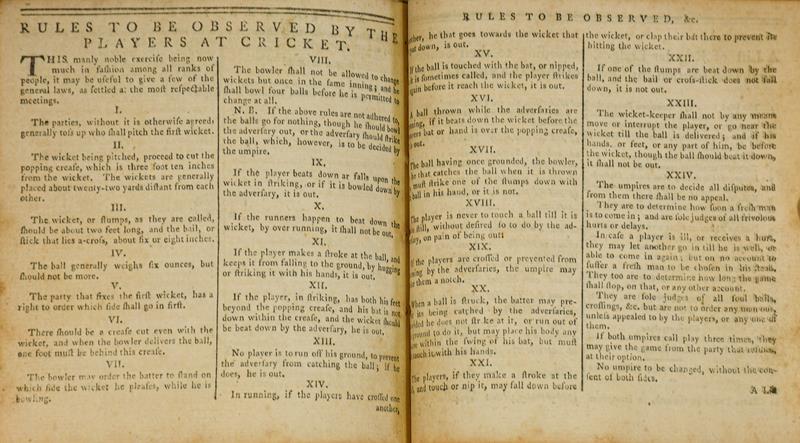 Cricket. 'Rules to be observed by the players at cricket' [2 pp., printed in:] The Sky-Lark: containing a New, Elegant, and much more Numerous Collection of well chosen English Songs than any Book hitherto published. Ranged in Alphabetical Order, to which are added, I. A Large Collection of Toasts, Sentiments, and Hob-Nobs. II. A New and Correct List of all the Free-Mason's Lodges in Europe; with the Time of their Institution, and Days of Meeting. III. The Art of Swimming, Diving, and Floating; by which any Person may learn to swim, without Further Instruction. IV. A Concise Account of all Sorts of River and Pond Fish, the Best Baits, and the Surest Method of taking them. V. Rules and Laws to be observed at the Game of Cricket, as settled at the most respectable Meetings, London: for T. Evans, 1772. Square 12mo in half-sheets (120 x 110 mm), late-19th or early-20th century quarter morocco (backstrip worn), [118] leaves only (of 135: lacking signatures C3-4, L3-4, N2-5, O6, Q2-5 and U2-5 or U3-6; ideal collation apparently A2 B-Y6 Z6+1), with all or nearly all the absent leaves pertaining to the 'English Songs' section which ends in quire U (the 'Rules' occupy Y3v.-Y4r.), spotting and browning, C2 and P6 torn with loss of text, blindstamp of the Georgia School of Technology to title-page and signature G4, related bequest plate to front pastedown, front free endpaper detached (qty: 1) ESTC T180508. An extremely rare early printing of the laws of cricket, three copies only traced by ESTC (two at the Bodleian, one at Harvard). The first separate edition of the laws of cricket appeared in 1755 as The Game at Cricket as settled by the several Cricket-Clubs, particularly that of the Star and Garter in Pall-Mall; one copy is known to have come to sale (Christie's, The Cricket Library of the Late E. D. R. Edgar, 21 April 2005, lot 42). The present edition predates the revised laws of 1774 (The Articles of the Game of Cricket), the founding of the MCC in 1787, and the publication of the first official code in 1788.