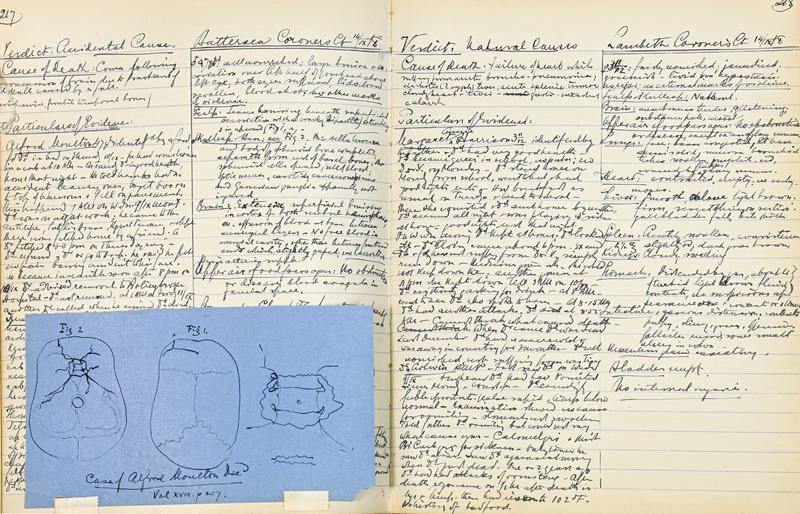 Jack the Ripper. Two manuscript daybooks kept by Ludwig Freyberger (1865-1932) as pathologist to the London South Western District coroner's court, 1902 & 1908. 2 volumes, 4to, contemporary half skiver (volume 1) and sheep (volume 2), backstrips perished, [31] 231, [42] 225 pp. + blanks, written in blue ink in a compact cursive hand, approx. 40-50 lines to the page, mainly in double column, index (arranged by cause of death) to front of each volume, the main text comprising postmortem reports arranged under headings 'Verdict', 'Cause of Death', 'Particulars of Evidence', and analyses of organs, numerous additional notes and letters (typed and autograph) laid in, diagrams of an abdominal tumour found in a young girl (1902 volume p. 63) and of a fatal skull fracture (tipped into 1908 volume p. 217) (qty: 2) The first volume (pp. 51-59) contains Freyberger's report on the death of Maud Marsh, who was poisoned by Polish-born serial killer Seweryn Klosowski, known as George Chapman, one of the prime suspects in the Jack the Ripper murders. The cause of death is recorded as 'antimonial poisoning; poison administered by Geo. Chapman', and the accompanying report is one of, if not the most extensive in either volume. There are numerous other records of poisoning across both volumes, the means being hydrochloric acid, arsenic, cyanide, coalgas, oxalic acid, lead, and even milk. Freyberger, a physician of Austrian origin, was appointed pathologist to the coroner for the London South Western District, Dr John Troutbeck, in 1902; the choice provoked a long-running controversy within the London medical establishment, who viewed it 'as a sinister assault on the medical profession … and English liberties writ large' (Burney, Bodies of Evidence: Medicine and the Politics of the English Inquest, 1830-1926, p. 125). Provenance: bequeathed to the vendor by Ludwig Freyberger's daughter Louise, the vendor's godmother.