Taxidermy: A Rare Diorama Cased Fox Terrier and Fox, by Peter Spicer, circa 1900, the full... 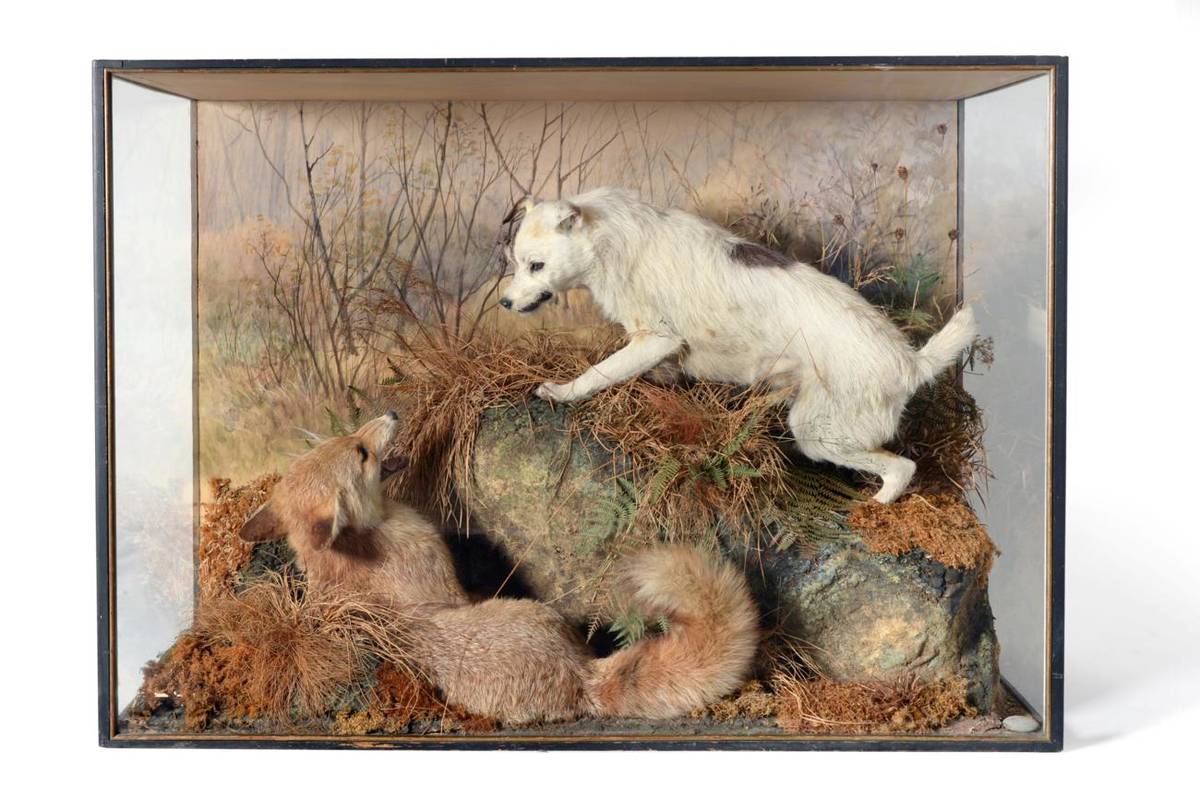 Taxidermy: A Rare Diorama Cased Fox Terrier and Fox, by Peter Spicer, circa 1900, the full...

Taxidermy: A Rare Diorama Cased Fox Terrier and Fox, by Peter Spicer, circa 1900, the full mount terrier stood upon a large faux rock snarling and looking down above a fox with mouth agape in defensive pose, both full mounts set amongst a natural woodland setting with ferns tall grasses moss and lichen, against a watercolour painted woodland back board, enclosed within a period three-glass ebonised framed display case 109cm by 52.5cm by 79cm, signed pebble to interior of the case Peter Spicer Leamington, taxidermists full paper trade label to verso
Provenance: This diorama case by Peter Spicer has been passed down through the family of Henry Allison (d.1917), a tenant farmer on the Skelton Castle Estate in Cleveland and owner of the present fox terrier. According to family lore, c1900 Allison's terrier was accidentally killed whilst out hunting by the horse of Squire William Wharton, the owner of the Skelton Estate. Such was the Squire's remorse, that he had the case commissioned for Allison, as a gift to remember his terrier by.

Peter Spicer is regarded as one of the greatest British taxidermists. He was born in 1839 and died on the 20th of January 1935, aged 96, which was a surprise to many as he was in frequent contact with arsenic. He ran a large taxidermy company in Leamington Spa during the late 19th and early 20th Century. His cased work is characterised by evocative watercolour painted backdrops and highly realistic bases made from papier-mache with dried vegetation and real signed pebbles which was a trademark way of identifying his work.