Fine Ziegler Mahal Carpet The ice blue field with an allover lattice design of palmettes and... 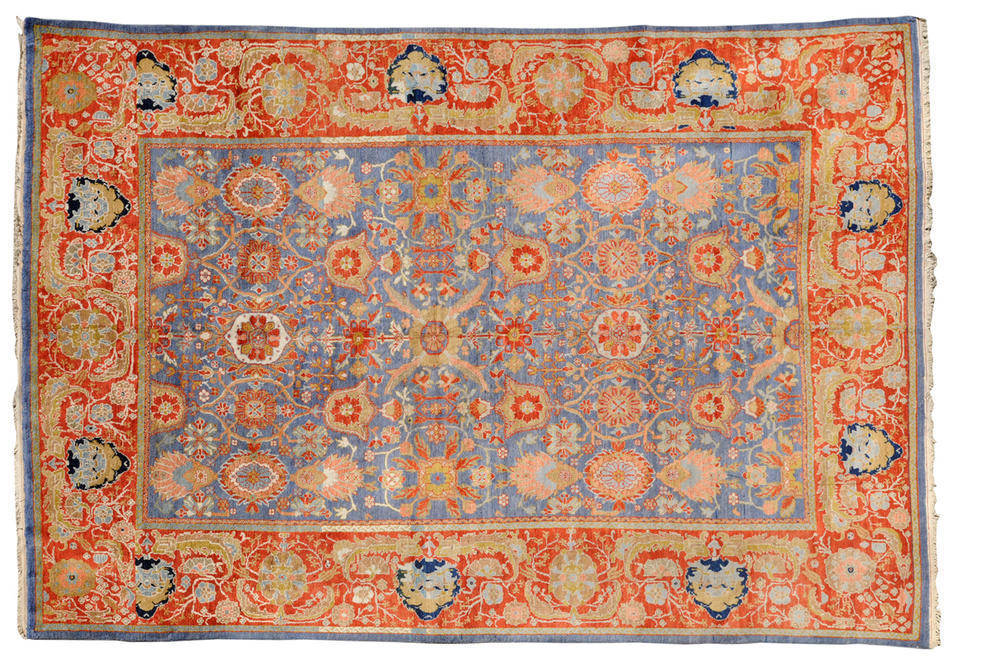 Fine Ziegler Mahal Carpet The ice blue field with an allover lattice design of palmettes and...

The present Elveden Hall was designed by Sir John Norton in the 1850's as the home for Maharaja Duleep Singh, the last Sikh Emperor who was deposed by the British in the Punjab in 1849. Perhaps the Maharaja is most famed for his 'gift' of the Koh i Noor diamond to Queen Victoria. Following Duleep Singh's death in 1893, the estate was bought by Sir Edward Guinness, first Earl of Iveagh. The house was lavishly refurbished in 1894. Purchases included twenty-three Ziegler carpets, then considered to be the finest Oriental carpets on the market. Elveden Hall remained virtually unused by the Guinness family until a decision was reached to sell the contents in 1984. Many of the larger Ziegler carpets sold for prices in excess of £30,000 each and re-established Ziegler carpets as the most sought after weavings on the market. Today the house remains empty but is occasionally used as a film set.

Zieglers, a Manchester based firm dealing in the export of cotton, established offices in Turkey and Iran during the third quarter of the 19th century. The firm opened an office in Sultanabad, West Iran in the 1870's and quickly moved into carpet production. Zieglers organised weaving on a cottage industry basis. They supplied local weavers with loans, looms, cotton, wool and dyes. New designs were commissioned and old ones adapted specifically to suit European and American homes. Strict quality control was enforced and sub-standard pieces were rejected. Today Ziegler carpets are still considered the most desirable weavings on the market.