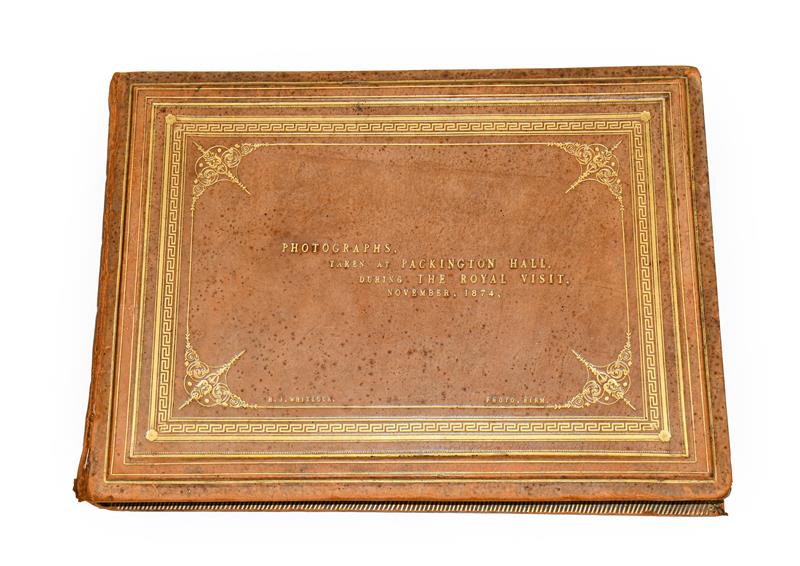 Marlborough House Set. 'Photographs taken at Packington Hall, during the Royal Visit, November 1874. H. J. Whitlock, Photo[grapher], Birm[ingham]' [cover-title]. Oblong folio album (350 x 460 mm), original tan calf, smooth spine ruled in gilt, front board with gilt lettering and decoration including Greek-key roll within broad embossed frame, 34 albumen-print photographs all window-mounted rectos and versos in 9 thick card leaves, including 3 large oval prints (255 x 325 mm), 4 large oblong prints (230 x 330 mm), the rest of various dimensions (165 x 220 mm to 85 x 60 mm), subjects comprising views of Packington Hall, and group and individual portraits, the latter including the future Queen Alexandra (feeding dogs, in a horse-drawn trap, or accompanying a child, presumably the future George V, in a goat-drawn pram), the Earl of Aylesford, and other unidentified figures, front joint cracked at foot, spotting to mounts and sometimes to prints, a minority of the smaller prints faded (qty: 1) An imposing visual record of the visit of the future Edward VII and Queen Alexandra to the seat of his close companion Heneage Finch, 7th Earl of Aylesford, whose divorce from his wife Edith a few years later provoked a scandal which brought the raffish behaviour of Edward's circle to public attention and ensured that 'Marlborough House ... became a byword for louche morals' (ODNB). Alienated by her husband's habitual drunkenness and philandering, Lady Aylesford conducted an affair with Lord Blandford, who was the future Duke of Marlborough and the uncle of Winston Churchill, and eventually demanded a separation in 1876. In 1883 Aylesford went into self-imposed exile in Texas but died of alcoholism two years later at the age of 35. The future Alexander III of Russia (1845-1894) is also known to have been in attendance at Packington and appears to be present in three group portraits taken on Packington's terrace, wearing a beret and seated on the stone balustrade. Provenance: by direct descent to the present owner.