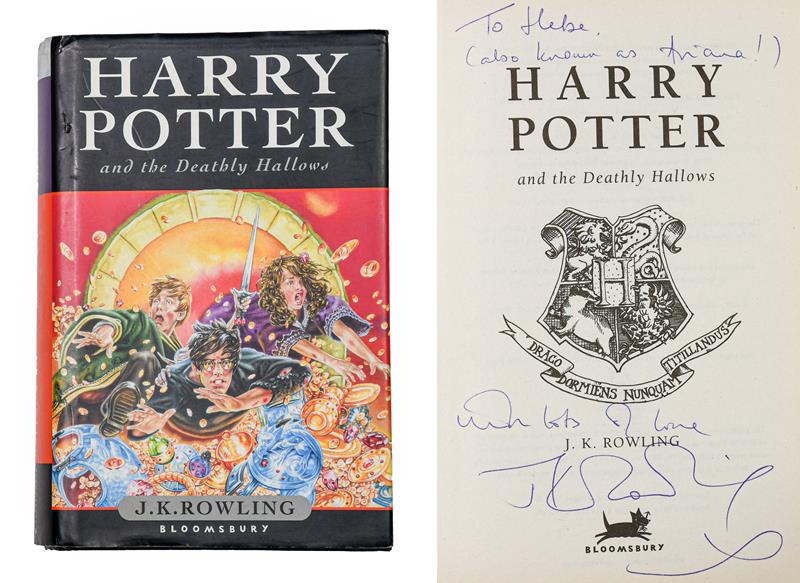 Rowling (J. K., 1965-). Harry Potter and the Deathly Hallows, London: Bloomsbury, 2007. 8vo, original pictorial boards, dust jacket, spine rolled, a few marks to front free endpaper, a little spotting to fore margins of pp. 552-65 (also visible on fore edge), dust jacket slightly rumpled along top edge (qty: 1) 'The stairs opened on to a sitting room with a threadbare carpet and a small fireplace, above which hung a single large oil painting of a blonde girl who gazed out at the room with a kind of vacant sweetness ...' Errington A14(a). First edition, Ariana Dumbledore's copy, inscribed by the author 'To Hebe (also known as Ariana!), with lots of love, J K Rowling' on the title-page. The recipient was Hebe Beardsall (1993-), who played Ariana, the sister of Albus Dumbledore, in Harry Potter and the Deathly Hallows (2010-11). Ariana Dumbledore was accidentally killed while trying to intervene in a three-way duel between Albus Dumbledore, their brother Aberforth, and Albus's friend, the future Dark Wizard revolutionary Gellert Grindelwald. Her existence is first revealed in an extract from Rita Skeeter's scurrilous biography of Albus published in the Daily Prophet, which alleges that she was a squib kept hidden by the Dumbledore family out of shame; in fact her magical powers were too powerful for her to control, and in a rage at the age of fourteen she caused an explosion in which the Dumbledores' mother Kendra was killed. Ariana's portrait above the fireplace in the Hog's Head Inn, Hogsmeade, conceals a secret passage back into the Room of Requirement, and it is Ariana who leads Harry, Ron and Hermione back into Hogwarts for the final battle against the forces of Lord Voldemort. Harry Potter was Hebe Beardsall's first screen role. She has recently been cast in the forthcoming instalment of a major space fantasy franchise, and her other roles have included Happy Valley (2016), Victoria (2017) and The Alienist (2020), and feature films How to Talk to Girls at Parties (2017) and Funny Cow (2017). 'Aberforth remained fixed in his chair, gazing at Harry with the eyes that were so extraordinarily like his brother's. At last he cleared his throat, got to his feet, walked around the little table and approached the portrait of Ariana. ''You know what to do,'' he said.'