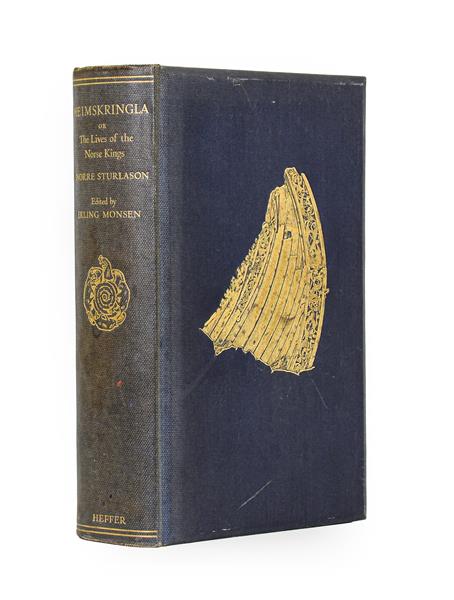 Lewis (C. S., 1898-1963; his copy). Heimskringla, or the Lives of the Norse Kings, by Snorri Sturlason. Edited with notes by Erling Monsen, and translated into English with the assistance of A. H. Smith, Cambridge: W. Heffer & Sons Ltd, 1932. 8vo, original blue cloth, 8 plates, 4 folding maps, errata slip, front inner hinge cracked but firm, light spotting to top edges of folding maps and adjacent text-leaves, with a manuscript note on a slip of Exeter College, Oxford stationery (the note reading 'Thank you so much for a noble evening from you and Fox [...]', in an unidentified hand) and a W. Heffer & Sons catalogue subscription form, both laid in (qty: 1) C. S. Lewis's copy, with his detailed autograph annotations to the rear blank (recto and verso; 83 lines in total, the noted passages been marked in pencil in the margins), his ownership inscription 'C. S. Lewis' to the front free endpaper, and a laid-in sheet of manuscript poetry in pencil, very likely in Lewis's hand and containing two stanzas in iambic tetrameter (respectively commencing 'Thrice fortunate that man w[oul]d be / For whom so high a destiny / Was written [...]' and 'Now, as she ran, she saw her shadow /Darken before her in the meadow') together with another version of the second stanza below. A hugely evocative literary artefact and a fascinating insight into C. S. Lewis's meticulous reading habits; in his spiritual autobiography Surprised By Joy (1955) Lewis attached great significance to the 'imaginative Renaissance' which sprung from his first encounter with Norse mythology as a young schoolboy. Provenance: Laurence Harwood OBE (1933-2020), regional director, National Trust, and godson of C. S. Lewis. Laurence's father (Albert) Cecil Harwood (1898-1975) met Lewis at Oxford in Hilary term of 1919. The two became lifelong friends, and while Cecil is not typically reckoned among the usual roll-call of Inklings members, he remained very much part of Lewis's circle, and with his wife Daphne was the joint dedicatee of his 1947 work, Miracles. Cecil is perhaps best remembered as a leading advocate of anthroposophy and the Steiner-Waldorf teaching method; Laurence has been noted as 'one of the few remaining people who really knew C. S. Lewis' (Deborah Higgens, 'A Personal Tribute to Laurence Harwood, OBE', C. S. Lewis Foundation official blog, 14 December 2020, accessed 24 May 2021). Further reading: Laurence Harwood, C. S. Lewis, My Godfather: Letters, Photos, and Recollections (Downers Grove, IL: IVP Books, 2007).