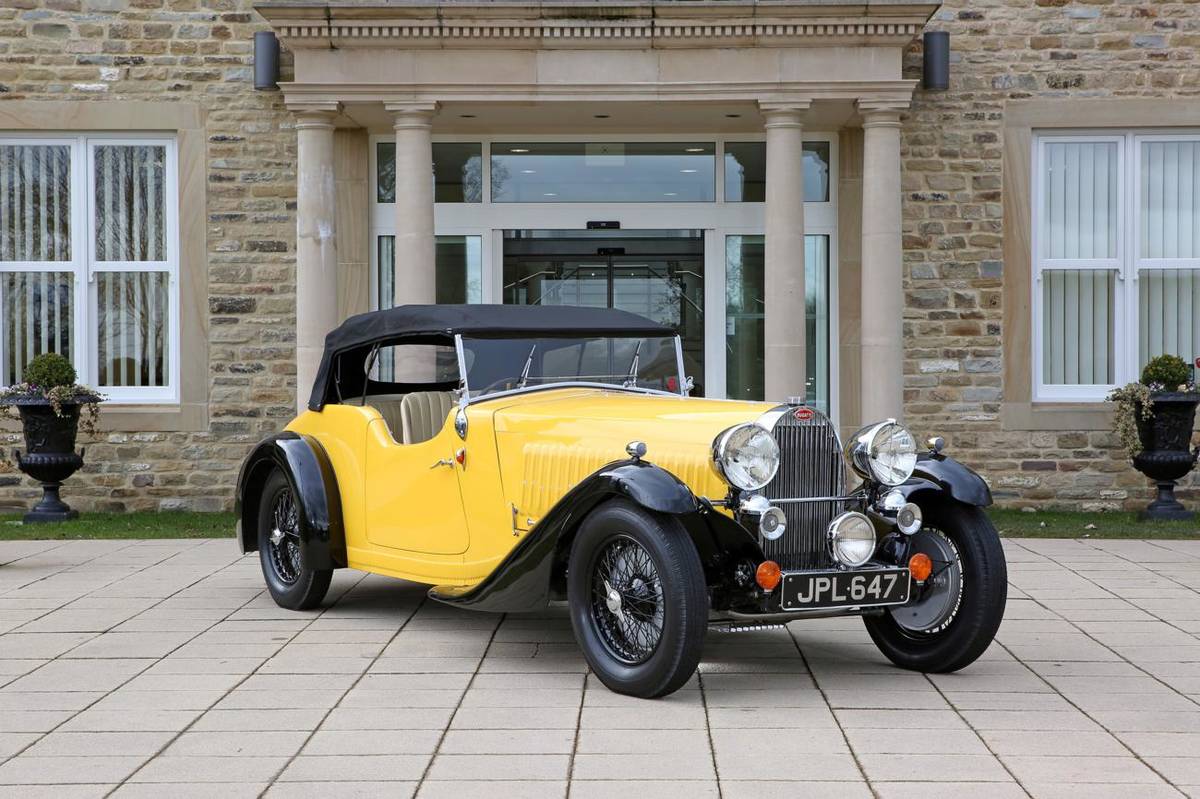 Restored to a very good standard by its current owner, using some of the leading specialists, the car has been finished in stunning bright yellow with some later additions.

PLEASE NOTE: Online bidding is NOT available for this lot, should you wish to bid please contact the Auctione Centre on 01969 623780.

Delivered to Bugatti, Brixton Road on 27th April 1935. From the extract from the factory records, it can clearly be seen that 57324 was ordered for stock by Col Sorel for the Brixton Depot. At this present time there is no recorded pre-war ownership, and quite why the car was registered (or even re-registered) as late as 1st April 1944 remains a mystery.

Purchased by Samuel William Henshaw on 3rd March 1961; he was to retain the car for 41 years.

During Henshaw's ownership the car was sent to Alan Wragg of Sherwood Restoration (Bildworth, Nottinghamshire). He restored the car to a rolling chassis, but it was not until 2002, when the Henshaw Collection came up for sale and was sold, that the restoration recommenced.

In relation to the specialist that carried out the work, the new owner used professionals which, in his opinion, were at the top of their trade.

· Engine, which included a new crankshaft and cylinder block and gearbox, was restored by Ivan Dutton Ltd. Work on record includes clean-up of the crankcase and sump, white metalling and line boring, water pump restoration and machining of replacement impellers. They also cleaned up cam boxes and carried out leak test on block during 2007.

· Coachwork restoration including ash framing, four new wings, re-panelling of the body and paint was carried out by I Wilkinson & Son Ltd of Derby during the period 2005-2007.

· All chrome work was carried out by Derby Plating Services Ltd.

· All trim work, including the hood, side seams and tonneau cover by Jack Buckley of Saddleworth.

During the course of the restoration, the owner decided to introduce some personal enhancements such as the fitment of a Bentley MKVI dashboard and Derby Bentley petrel tank cap. A replacement fuel tank in stainless steel was also manufactured.

Marchel headlights (Aerolux/Strilux pattern) replace the previously illustrated Scintilla units. Lucas side lights were fitted, and the rear lights D Type pattern rear lights were added along with reflectors and orange indicators front and rear. Lucas horns are fitted to the front.

In its present ownership, the car remained off the radar, only being presented for the first time and displayed at Salon Privé. Blenheim Palace on 2nd September 2017.

Overall, the car presents a very practical and usable example of a touring Type 57.

The correlation of the major component numbers:
Front axle 204
Engine 204
Gearbox 204
Frame number 206
is just as one would expect to see on an original Molsheim car.

That the car is fitted with the correct early pattern rear axle, numbered 85, can be explained, we believe, by having been swapped with the other Type 57 in the Henshaw Collection, Chassis no. 57159 Engine no.85.

Both engine and coachwork restoration has been carried out by leading specialist Ivan Dutton Ltd and I Wilkinson & Son Ltd of Derby. Inevitably, there will be still a period of "sorting" with the car, but nevertheless it would be sensational to see one of the very rare 1935 Grand Raid models back on the road.

The additional instruments could, if so wished, be reintroduced by the manufacture of a new dash board, and the shock absorbers could possibly be utilised in the rear axle.

A detailed 61 page report by leading expert, Mark Morris, is available on request by contacting Jeremy Pattison at The Auction Centre, Leyburn.