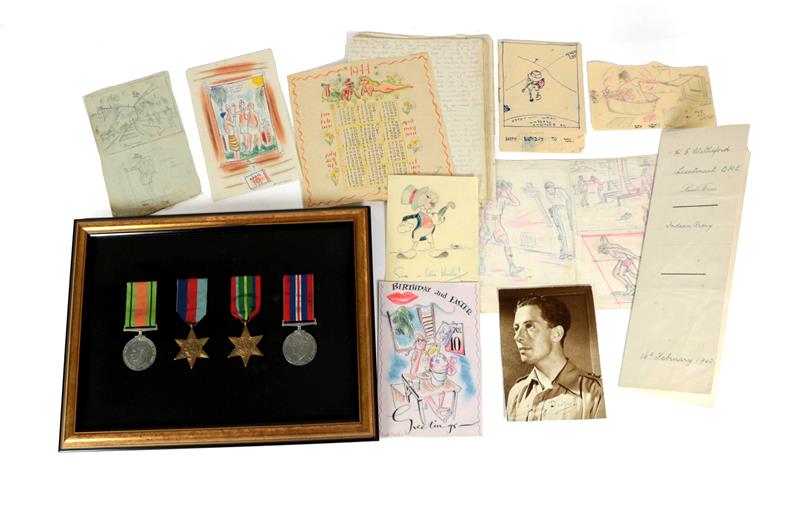 A Second World War Archive Relating to Changi P.O.W. Camp, Singapore, collected by prisoner Captain Harry Edward Witheford (1912-2008) and including his framed group of medals comprising 1939-45 Star, Pacific Star, Defence and War Medal, Indian Office letters and a Short Statement of Service,  his commission as Lieutenant O.M.E. Indian Army (16.02.1940), his  handwritten journal, a 1944 Calendar and two greetings cards signed by Ronald Searle, various other sketches showing life in camp and hand drawn greetings cards, various group and portrait photographs, two published books - The Naked Island, and End of a Hate by fellow  POW Russell Braddon, a book - Forty Drawings by Ronald Searle with inscription to the Withefords from Russ Braddon, a 1952 published volume of It Must Be True by Denys Parsons with illustrations by Ronald Searle, related magazines etc.
Footnote :- Captain Harry Edward Witheford 1912-2008
Harry served under Lt-Col Charles Anderson in the 45th Brigade of the Indian Army. He became a prisoner of the Japanese in Malaya after the fall of Singapore in 1942. He was imprisoned in the notorious Changi prison, and was forced to work on the Siam-Burma railway along the River Kwai.
Harry made many friends among his fellow prisoners including Ronald Searle. He was also friendly with the Australian author Russell Braddon, then a Gunner in the 2/15th Field (Artillery) Regiment. Braddon later recounted his experiences as a POW in the bestselling memoir, The Naked Island (illustrated by Searle). The book was one of the first to describe in grim detail the appalling treatment the POWs received. Braddon talks about Harry in several places in the book. He records how impressed he was by Harry's knowledge of the stars, production engineering and turbo jet-engines, but the most moving description comes near the end of the book. After completion of the railway line from Bangkok to Rangoon, Braddon describes how he and other survivors were sent by their captors on a long train journey to Kamburi. In this extract Braddon writes:

"As I staggered off the train, cramped and ravenous, for we had had no food for two days, I noticed that beside the line ran long rows of huts separated into two areas. In one were white men: in the other black men. Both lots looked shocking. The fence that marked the dividing line between railway and camp was draped with white men only. The natives no longer took any interest in anything. Therein lay the difference. And as I shambled towards this fence, one of the men on the other side crawled under it, dragged me through and greeted me with a warmth I had forgotten existed. It was Harry Witheford. I managed a feeble crack - 'How's your turbo-jet?' I asked - but was a bit overwhelmed. But he, good soul, knew what was required. Leading me firmly round the back of a hut he gave me bananas and boiled eggs - bought on the spot from a Thai - which I devoured frantically lest they vanish. Though I live to be a thousand the warmth of that greeting and the gift of that food after the sterile months of want that had gone before will never leave me." (pp.207-208)
Harry survived the war then spent time working in Kenya during the 1950s. He and his family returned to the UK, settling in North Yorkshire. Both Harry and Edna had a long and happy life until their deaths in their mid-nineties