Three Fans: The first, circa 1890's, a large painted fan with double paper leaf, a restful scene of 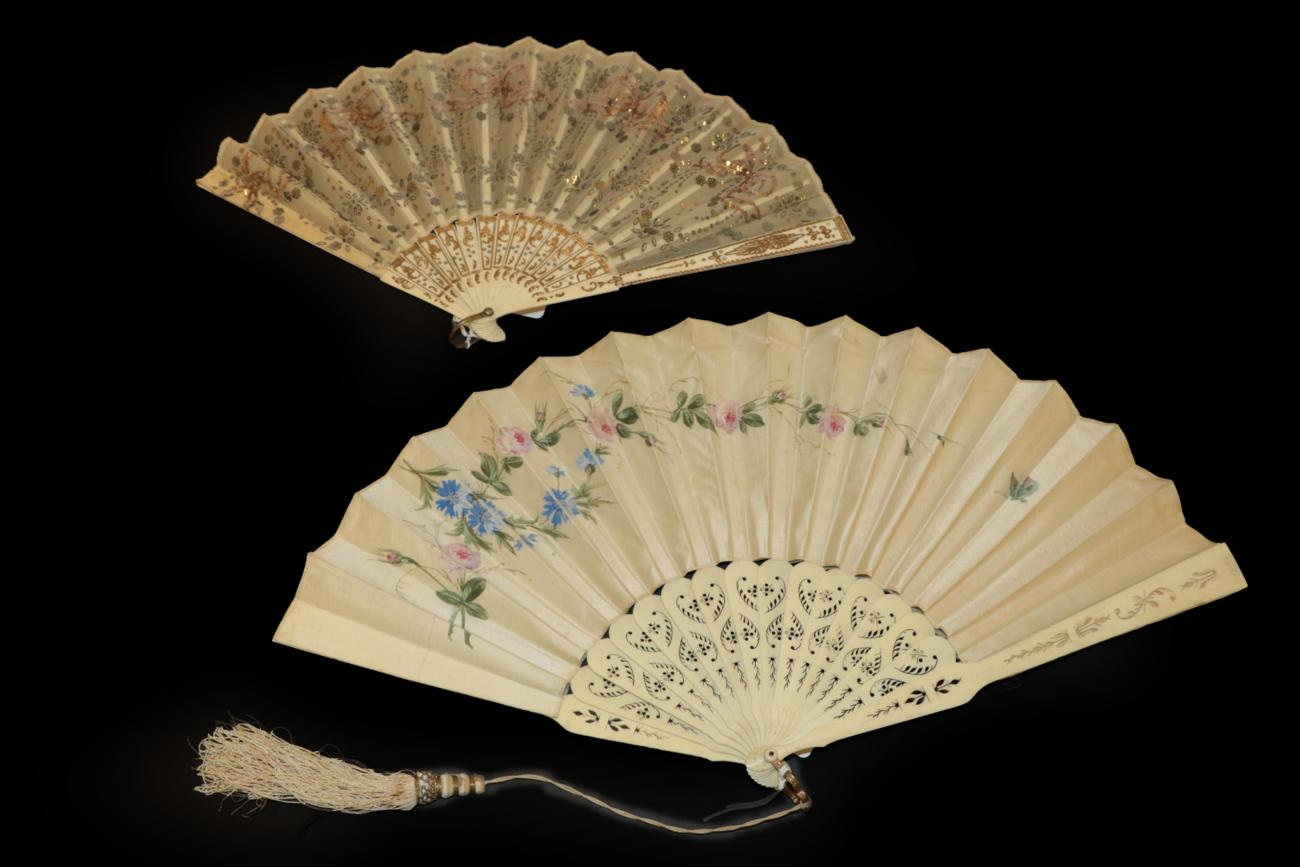 Three Fans: The first, circa 1890's, a large painted fan with double paper leaf, a restful scene of

Three Fans: The first, circa 1890's, a large painted fan with double paper leaf, a restful scene of a courting couple seated in a clearing, the lady holding possibly a book, her beau leaning in closely and attentively. The pink Mother of Pearl monture is plain, fitted with a gold metal loop and elaborately knotted cream silk tassel. The verso is plain. Guard length 12.5 inches or 32cm. Together with an early 20th century bone fan, the monture lightly carved and pierced, the double leaf being painted with flowers to the cream silk satin recto, the cotton verso being plain. Fitted with an embossed and shaped metal loop and a cream silk tassel decorated with gold thread. Guard length 9.5 inches or 24cm. Finally, an early 20th century sequinned fan, the gauze leaf mounted on gilded celluloid, further piqué with silver dots. The sequins embroidered in swags and ribbons in rose gold and silver. The verso is plain. Guard length 8.25 inches or 21cm. Together with Romance in the Countryside: two fans, the first early 20th century, printed on fabric in the Watteau style, with wealthy and grandly dressed couples gathering in the grounds of a large country house, at leisure. The bone monture is gently incised and gilded. Guard length 7.25 inches or 18.5cm. A mid-19th century bone fan, the monture carved, pierced, and gilded, the double paper leaf lithographed with winged cherubs mingling with a group of ladies and gentlemen, the central figures having made a floral garland being used by one cherub as a swing. The verso is plain. Guard length 10.5 inches or 27cm (5)

. 1890's fan: Good colour and painting. However, the leaf has damage to the left side, where two folds have been slightly damp and stuck, thus tearing when opened. The paper to fill the hole is present, still stuck. One tiny pinhole noted nearer the centre bottom of the leaf. The monture and tassel are sound. The satin fan is slightly crumpled with one pale mark right of centre near the top border. The backing fabric on the sequin fan is splitting but the recto is sound. Fan 4, two of the folds are slightly strained but holding. The earlier fan has damage, the leaf having a bad split to a fold at the left, some upper leaf crumpling, and the middle section of the upper guard is missing, this accident having also dislodged the first stick in.