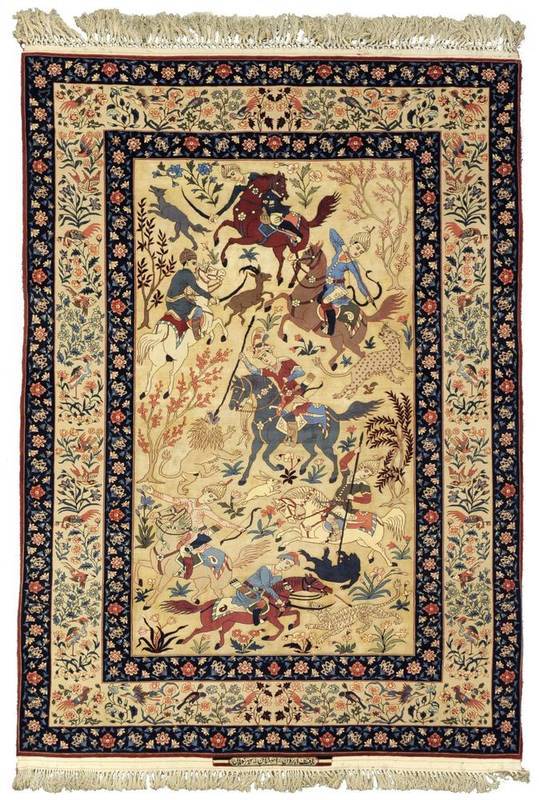 Signed in the lower kilim strip Seirafian Isfahan
Provenance: Bought by the vendor's mother in 1960

Seirafian Rugs: The city of Isfahan boasts many of Iran's finest mosques and buildings. The city has also produced fine rugs and carpets of outstanding quality mainly during the 16th and 17th centuries. Following a devastating attack by the Afghans in 1722, little weaving took place in the city for the next two hundred years but in the 1920's weaving resumed. Agha Seirafian, a well-to-do native of the city established workshops in 1939. Seirafian began producing small numbers of very fine rugs and occasionally carpets between 1940 and 1970. Designs were based on classical designs. With the possible exception of Kum Kapi (Istambul rugs made around 1900), Seirafian rugs were highly regarded at the time, being considered the best weavings of the 20th century. Silk is used for both warp and weft allowing for a very high knot count. Soft Marino wool is generally used for the pile although silk is sometimes used to highlight small motifs. The use of silk as the main material in the field, as in this example, is extremely rare. Seirafian began signing his weavings in a panel at one end against a backdrop of the Iranian flag. The signature was originally in Farsi but later rugs are also signed
Seirafian Isfahan. This rug dates from 1950's

Woven on silk with the field piled in silk and all other features piled in wool. Both ends complete with kilims and braided tassels. Pile is thick and without any wear. Two very minor stains. Selvedges curling. 290114