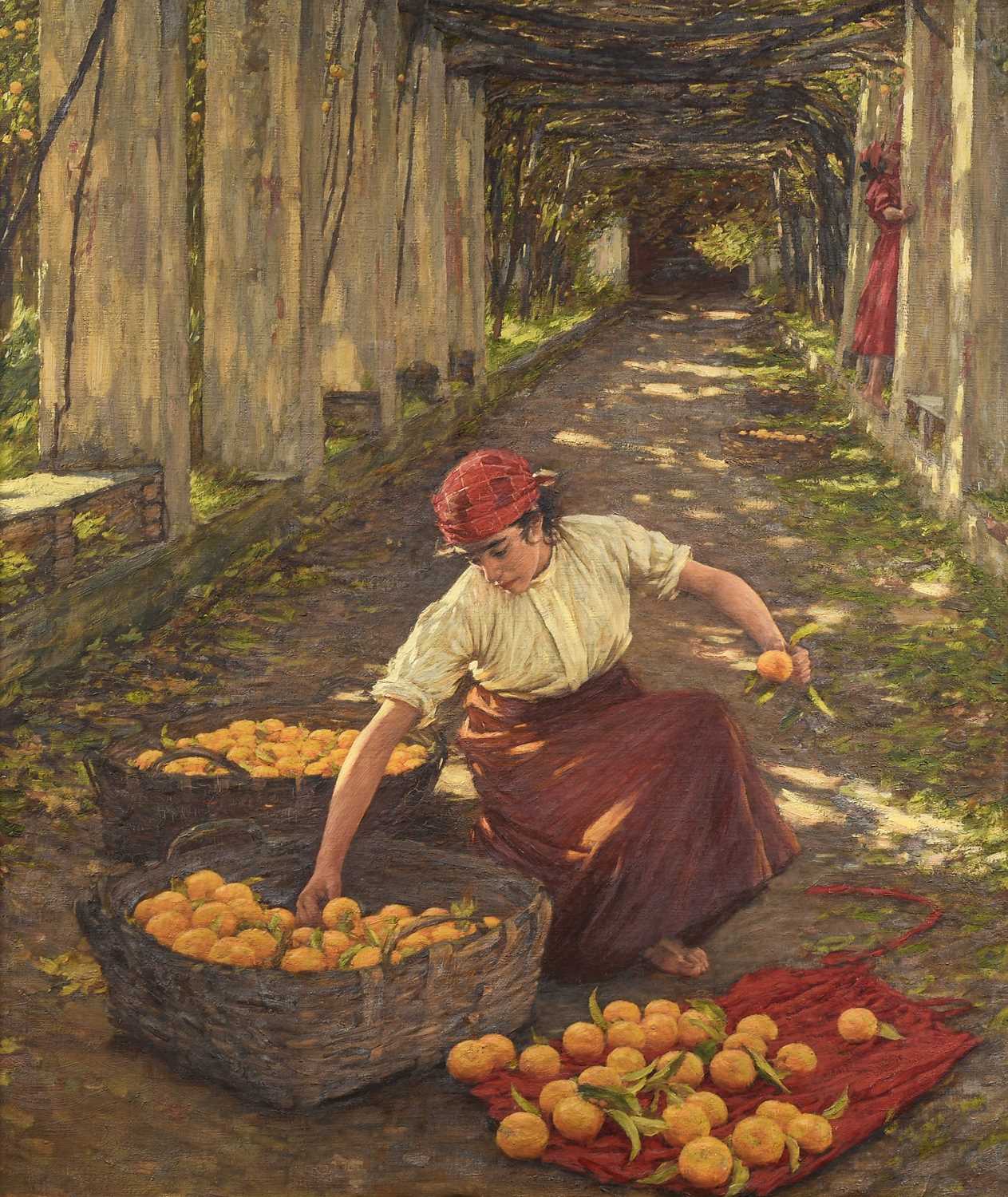 Not long before his death in December 1929, Henry Herbert La Thangue received a letter inquiring about his picture of A Ligurian Flower Girl, in Blackburn Art Gallery. He replied recalling it having been painted in ‘1907 or 1908 … in one of the villages along the [Italian Riviera] coast.’

The picture had been shown with "In a Ligurian Garden", its companion piece, at the Royal Academy in 1908. Known only from a contemporary illustration, this latter work has long remained unlocated, and its appearance here is an important rediscovery.

Over twenty years had passed since they were painted and La Thangue remembered these canvases ‘with pleasure … for the girl was so exceptionally nice and posed well’ and the garden, ‘where the picture was painted is the one of a fine old house … [that] presented even in its ruined state a very beautiful appearance …[1].

Although not hung side-by-side in the exhibition, it was nevertheless obvious that the two paintings represented different views of the same pergola. It cut through an orange grove, the trees of which gave shade to a thick carpet of flowers, cultivated specifically for the nearby perfume factories at Eze and Grasse.[2] La Thangue informed the Blackburn curator that such was his liking for the old house he returned a year or two later to discover that the family had moved, and sadly, their daughter had died. It is probable nevertheless that he produced two further works showing the little viale of what he described as ‘pilasters’ on one or other of these occasions. Indeed, so significant was the flower harvest that he chose one of these later works, Violets for Perfume, as his Diploma Picture when he became a Royal Academician in 1912.[3]

A former New English Art Club founder and firebrand, La Thangue acquired a following in his youth as a plein air Naturalist painter of rural subjects in a manner popularly associated with the much-admired French artist, Jules Bastien-Lepage. A decade later his impressive The Man with the Scythe 1896 was acquired from the Academy for the National Collection of British Art, which became the Tate Gallery. However, by the turn of the new century, La Thangue had begun to feel that he needed to look elsewhere for subject matter and, recalling a student trip to the south of France, he over-wintered in Provence in 1901-2. Thereafter, a pattern emerged that would result in the establishment of a studio at Bormes-les-Mimosas.

In the winter of 1903-4 La Thangue made his first foray into Italy and from that point until the outbreak of war, Ligurian pictures appeared in almost every Academy summer exhibition, sometimes representing hilltop villages and farms, with goatherds, lace-makers, fruit-sellers on narrow unexplored mountain roads known as sentieri.[4] Even though tunnels were blasted through the hillsides bringing the railway from Ventimiglia through Genoa and on down to La Spézia, the areas around Porto Maurizio, (Riviera di Ponente) where La Thangue was based in 1907-8, remained untouched. Considered ‘less picturesque’ by Baedeker, the particular charm of the peasant way of life in this region was left exclusively to La Thangue. [5]

While all four ‘pergola’ pictures convey the sense of nature’s abundance, the critical consensus favoured In a Ligurian Garden as his most significant recent work. For The Times and The Daily Telegraph, it was ‘radiant’ and ‘scintillates everywhere’, while The Sheffield Daily Telegraph concluded that ‘…never has Mr La Thangue given us a more beautiful picture of sunlight than this.’ Others were equally effusive – even in newspapers as far north as the Moray Firth, the painter was regarded as being at his best.[6] As one critic had noted previously, he, with George Clausen’s help, was saving the Burlington House from ‘Sargentine despotism’.[7]

Looking back to the early winters on the Italian Riviera La Thangue now realized that he had discovered a lost domain. The rose bower, so beloved by Rossetti and Burne-Jones existed for real. However, remembering the girl and the old house, he felt compelled to conclude that ‘… all of these regions have been spoilt by the war and still more perhaps by the peace …’[8] When his death was announced, the anonymous obituary writer of The Times referred to La Thangue’s characteristic manner of representing the peasants of Provence and Liguria, ‘in dappled light and shade, with direct and forcible brushwork and a strongly personal note in the colour schemes’.[9] Clausen, the artist’s lifelong friend, pitched this bald encomium at a higher level. La Thangue was prompted, he declared, by ‘… some simple motive of rural occupation enhanced by a picturesque surrounding … [and containing] primarily the beauty of things in sunlight’.[10] In this he could justly be compared with the masters he always admired – especially Vermeer and Velàzquez.

However, none of these graveside eulogies quite touches the profound sensuality of La Thangue’s evocations of the Ligurian garden sanctuaries. For the writer, Vernon Lee, arriving in Liguria during the painter’s student years, they belonged ‘to no time’ and ‘will always exist’. The ‘cool shadow … heavy with romance, of wine-saturated oak and crumbling plaster’ produced ‘a little stab of joy that this is Italy’.[11] The fragrance of ripening fruit and blossoming flowers mingling with that of crumbling plaster is precisely what La Thangue uniquely has captured In a Ligurian Garden. This indeed is Italy.

[4] La Thangue’s first Ligurian canvases – A Ligurian Cradle (unlocated) and From a Ligurian Spring (Private Collection) – were exhibited in 1904 and, with the exception of 1910, were shown every year thereafter until the Great War. In a letter dated 21 March 1905, (Hyman Kreitman Archive, Tate Britain) to the sculptor, James Havard Thomas, George Clausen, then Professor of Painting at the Royal Academy, reports, ‘…La Thangue also writes me now and then – this winter they’ve been in Italy, near Genoa.

[5] Karl Baedeker, Northern Italy, A Handbook for Travellers 1913 (Leipzig), p. 121. Baedeker notes that there was an Anglican church in the town.

In an overall very good and stable and untouched state of preservation. Covered in a layer inconsistently deteriorating varnish and bloom which is more apparent or pooling in certain areas, see images. There are a few areas of slightly more pronounced or noticeable cracquelure which is essentially stable, see back basket, her head scarf and smaller area slightly above centre, right-hand side edge and also within the lower reaches of the basket belonging to the standing orange picker to the background. Canvas retains good tension and overall surface. The signature is mostly obscured by the frame having slipped and original nail marks are visible along the upper edge. Original frame, various knocks but stable. For more information please contact the department.

'In a Ligurian Garden', an important lost work by Henry Herbert La Thangue, is to be sold in the British, European and Sporting Art Sale on 16th July with an estimate of £70,000-100,000 plus buyer's premium. The painting was recently rediscovered in Yorkshire, having been passed down through the family of Sir William Prince-Smith (1898-1964) and his wife Marjorie, manufacturers of textile machinery from Keighley, West Yorkshire.  View lot

Henry Herbert La Thangue RA (1859-1929) was one of the leading exponents of British Impressionism, who had become enamoured with painting 'en plein air' on a youthful painting trip to Brittany in 1881 with friend and fellow artist Stanhope Forbes, one of the founders of the Newlyn School of Painters. On his return to England he settled in Sussex, painting farm labourers in idyllic, rustic surroundings, recording a way of English rural life that was fast being lost to increasing industrialisation.

Sunday 10 July 11am-4pm, Monday 11 July to Friday 15 July 10am-4pm and morning of sale from 8am. Viewing is open to the public, there is no need to make an appointment.