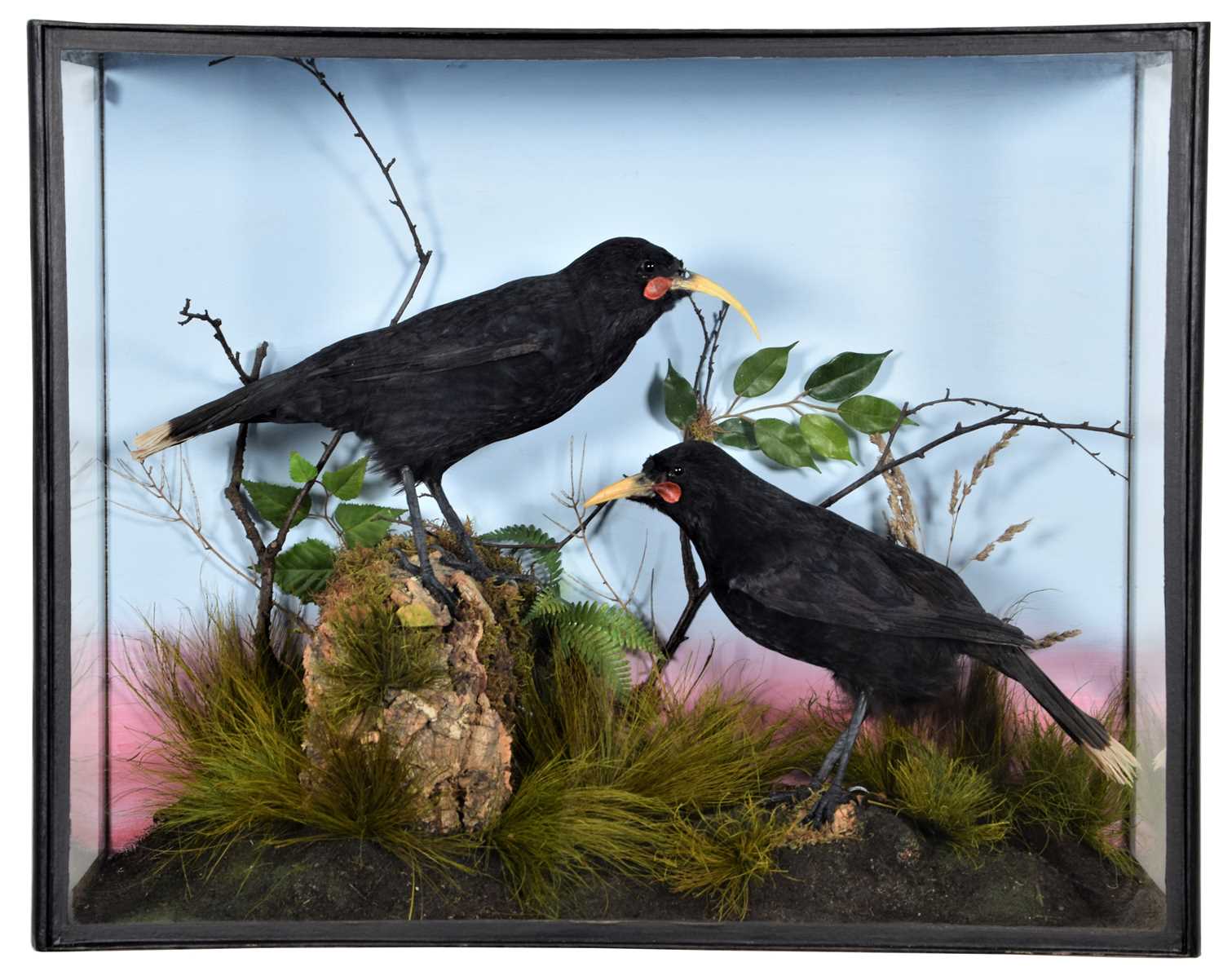 Taxidermy: A Cased Reproduction Pair of Extinct New Zealand Huia Birds (†Heteralocha acutirostris), modern, a pair of composed full mount Huia birds, the female perched upon a dry cork tree stump, the male below upon soil covered groundwork, amidst a natural setting of ferns, grasses and fauna, set against a pale blue and pink painted back drop, the beaks have been reproduced from actual beaks of specimens shot in the Gollans Valley, York Bay, New Zealand circa 1890, mounted upon substitute donor bodies, enclosed within a period style ebonised three-glass display case, 71cm by 30.5cm by 56cm, bearing ivorine label to interior lower right "Taxidermy by Frankenstein".

The Huia birds extinction had two primary causes. The first was rampant overhunting to procure huia skins for mounted specimens and their tail feathers for hat decorations. The second major cause was the widespread deforestation of the lowlands of the North Island by European settlers to create pasture for agriculture. Most of these forests were ancient, ecologically complex primary forests, and huia were unable to survive in regenerating secondary forests.

It was already a rare bird before the arrival of Europeans, confined to the Ruahine, Tararua, Rimutaka and Kaimanawa mountain ranges in the south-east of the North Island. It was remarkable for having the most pronounced sexual dimorphism in bill shape of any bird species in the world. The female's beak was long, thin and arched downward, while the male's was short and stout, like that of a crow. Males were 45 cm (18 in) long, while females were larger at 48 cm (19 in). The sexes were otherwise similar, with orange wattles and deep metallic, bluish-black plumage with a greenish iridescence on the upper surface, especially about the head. The tail feathers were unique among New Zealand birds in having a broad white band across the tips.

A superb quality auction comprising over 300 lots, including Victorian, Mid-Century, and modern Taxidermy and Natural History specimens by some of the most prolific and renowned taxidermy companies of the last 140 years, to include a private collection of cased Victorian birds and animals from a private vendor, numerous antique and modern African game trophies from various private vendors, rare and unusual Natural history specimens including a large Narwhal Tusk, and three wonderful Blonde Turtle shells.

Tuesday 7 December 10am-5pm and morning of sale from 8am