A Pair of George III Silver Wine-Coolers, Collars and Liners, by Thomas and James Creswick,... 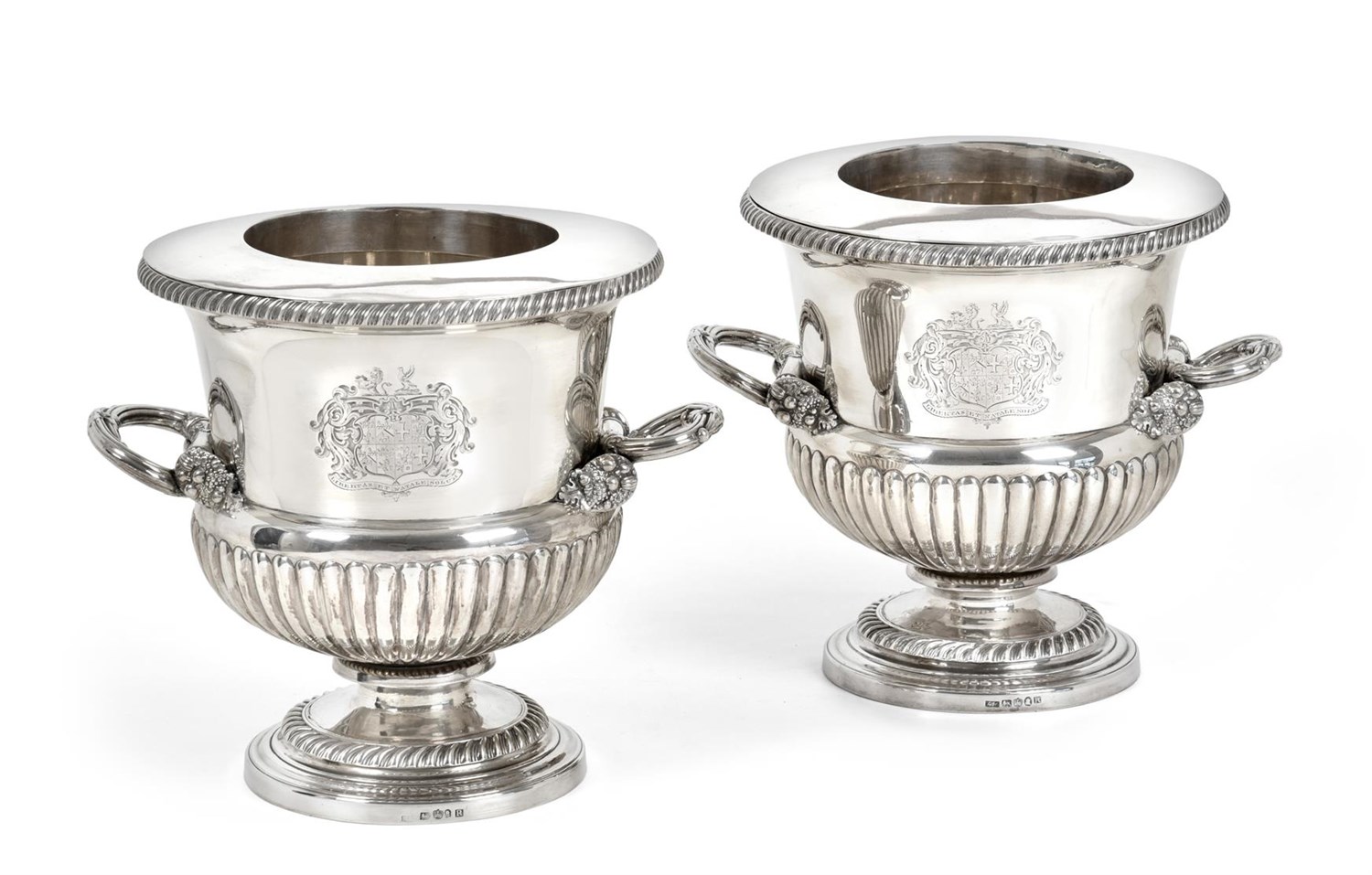 A Pair of George III Silver Wine-Coolers, Collars and Liners, by Thomas and James Creswick,...

A Pair of George III Silver Wine-Coolers, Collars and Liners, by Thomas and James Creswick, Sheffield, 1813, each campana-shaped and on conforming spreading gadrooned foot, the lower body part-fluted and with cornucopia cast handles, with plain collar and liner, engraved with a coat-of-arms, 23.5cm high, 157oz 2dwt, 4,886gr (2) The arms are those of Whitshed quartering Hawkins and impaling Bentinck for Admiral Sir James Hawkins-Whitshed, G.C.B., later 1st Baronet, (1762-1849) and his wife Sophia Henrietta, daughter of Captain John Albert Bentinck R.N. Provenance: Admiral of the Fleet Sir James Hawkins-Whitshed (1762-1849) and probably by descent to Sir St Vincent Bentinck Hawkins-Whitshed, 3rd Baronet (1837-1871) and possibly by descent to his daughter Elizabeth Hawkins-Whitshed (1860-1934). Christie's, London, 30 May 2012, lot 363. Hawkins was born in Raphoe in Co. Donegal, the son of the Rt. Rev. Dr James Hawkins and his wife Catherine. He had joined the Royal Navy by 1773 and he was to have a distinguished career, serving at the Battle of Martinique during the American War of Independence and later the war against France. By 1799 he was in charge of the HMS Queen Charlotte and later the HMS Temeraire, the ship later made famous in the painting by Turner. In honour of his service Hawkins was made Knight Commander of the Order of the Bath in 1815, Knight Grand Cross of the Order of the Bath in 1830 and created a baronet of Killincarrick in 1834. He was to have six children with his wife Sophia. As his eldest son, also James, was killed while serving on the HMS Berwick he was succeeded as second baronet by his second son St Vincent Keene Hawkins-Whitshed. The baronetcy however was to become extinct on the death of Sir James' grandson. While the provenance after the 1st Baronet is unclear it would seem almost certain that the present wine-coolers descended to the 3rd Baronet who was to die in 1871 without male heir. The estates, including Killincarrick House, which is now the home to the Greystones Golf club, passed to his daughter Elizabeth. Elizabeth was to have a storied life with a number of marriages and fame as an author, mountain climber and photographer.

. Fully marked on base, collar and liner. The marks are generally clear. There is some surface scratching and wear, consistent with age and use. The wear is noticeable as a minor softening to the engraving. There are some small shallow bruises. The foot of one is very slightly bruised which causes this cooler to lean very slightly.